Today I wanted to do a firmware update on my Netgear GS105E. This is a cheap managed switch with VLAN capabilities. It works well, the only disadvantage is that instead of a web interface it it comes with a small application to manage it. For unknown reasons Netgear wrote this application based on Adobe Air, and would only run on Windows, but it works well. Well … may be not so well, it failed during a firmware update, with a TFTP timeout occured! The switch worked after, but became un-manageable, the application reported ‘No switch exists in the local network’, very frustrating. After googling a bit I found that many people were struggling with the same problem. The answers were not really leading to a solution, but unwilling to give up, I started to investigate. 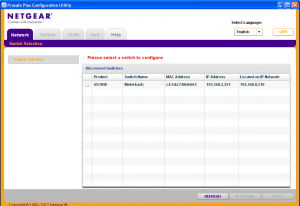 I found by doing a broadcast-ping that the switch had given itself the IP address 192.168.0.239. So I changed my computer’s IP address to be in the same subnet, but that didn’t help a lot. The application still could not manage the switch. On the Netgear forums I read something similar and people reported that they had to send in the switch to Netgear for repair. People reported that no ports were open and that the swich seemed to have died. but then I had a bright idea… let’s try TFTP the firmware to the switch. TFTP is a port that works over UDP, so it will never show that the port is open in a portscan. after launching the tftp program it was easy:

Nothing happened initally after entering the put command, but then after a few second but the the activity LEDs started flickering on the switch, a very good sign! After the upload had finished I saw the lights go off for a second, indicating that the switch booted. After its reboot the device was back to its old IP and guess what… my switch was manageable again! Solved, hope this helps others running into the same issue.